Teresa Herzgsell: Genre distribution and Fictional Prose in the Magazines of the Avant-Garde

When looking at all 19248 contributions across the avant-garde magazines of the corpus of the project ‘Literarische Modernisierungsprozesse und transnationale Netzwerkbildung im Medium der Kulturzeitschrift: vom ‘Modernismo’ zur Avantgarde’ in their totality, we can see, as this graphic illustrates, that there is a clear preponderance of Non-fictional Prose texts, with such texts making up almost half of all contributions. 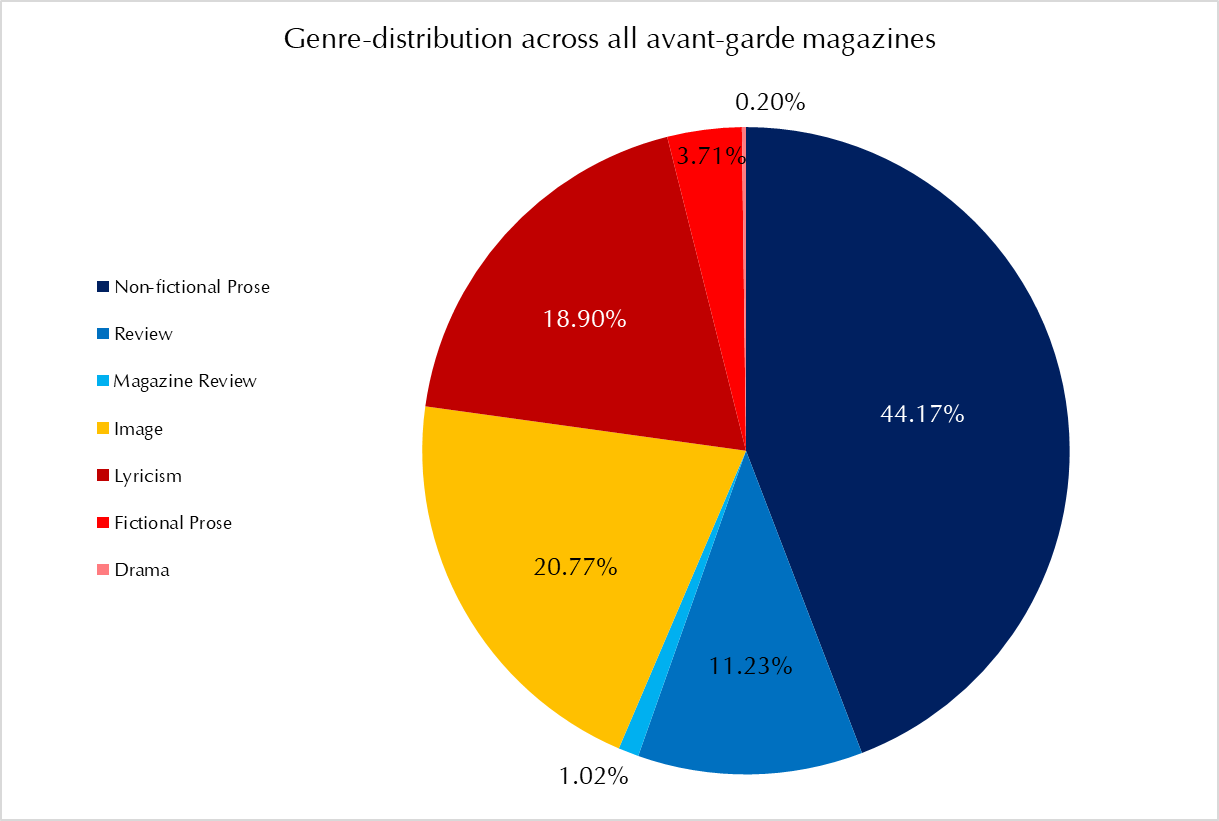 Together with the two other not primarily literary text types in the categories – Review and Magazine Review – this suggests that the magazines investigated by the project are not necessarily focused on the publication of artistic and literary production itself and that they provide less of a place for publication of such material and more of a space for discussion and accompanying commentary. This is not the case, however, and it is once more an indicator of the challenges posed by statistical values and diagrams, as they need to be read with caution and require either extensive knowledge of the subject matter or careful description of the data used. A contextualization brought together with other values that creates a dialogue within the data-explorations, aimed at understanding and interpretation, and not just stating singular facts, is better equipped to give insights into the corpus. When the data behind this diagram is pulled apart and the single magazines are looked at, it becomes clear that the surplus of Non-fictional Prose is created mostly by the larger publications (1), such as La Gaceta Literaria, Claridad, Revista de Avance, and Amauta, which all have more than a thousand contributions and shift the values in favor of this type of contribution.
This genre distribution, therefore, is not indicative of all the magazines investigated. In particular, smaller magazines often had another publishing programme, and sometimes almost exclusively focused on the publication of literary – mostly lyrical – texts. This phenomenon can be seen in the table below, in which all avant-garde publications included in the project are listed and the distribution of genres in each title are indicated. The highest value per magazine title is marked red, and the last line gives the average percentage of the respective type of contribution across all of the magazines in the study. This allows for a comparison of each magazine’s values, and shows that, when size differences are eliminated (as only the percentages and not the total numbers are used for this average), this results in a different picture of this part of the project corpus. 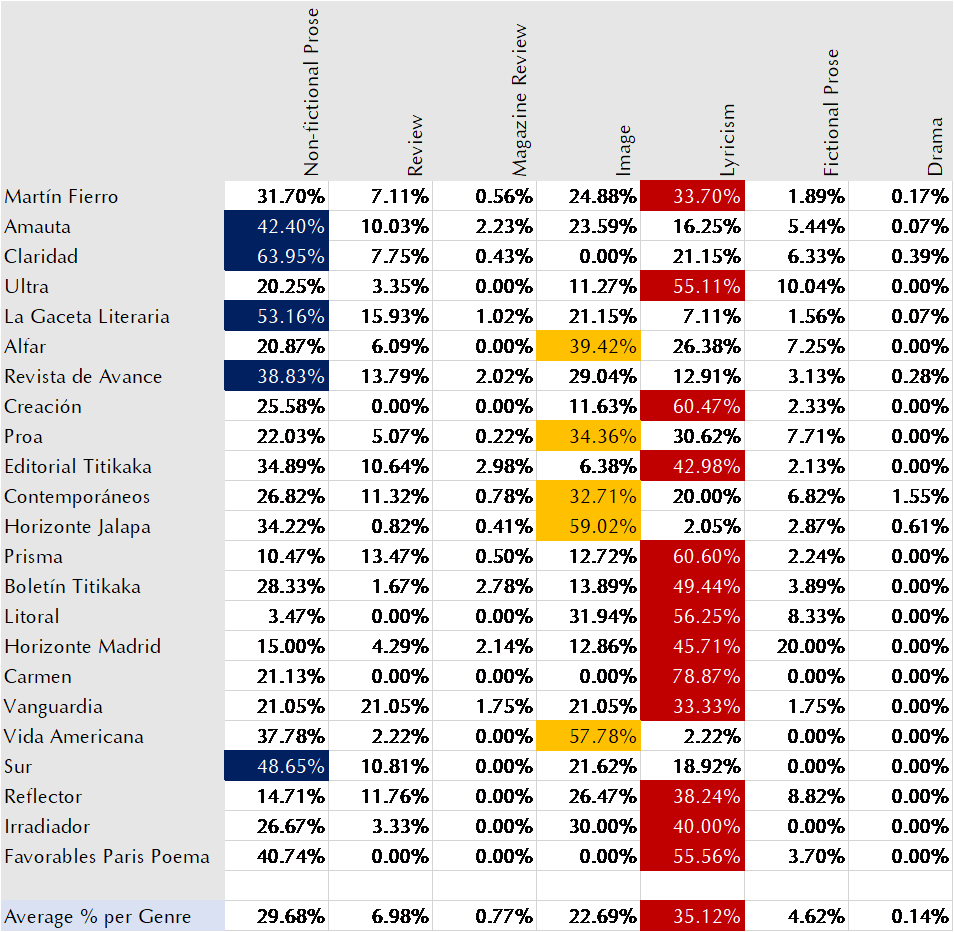 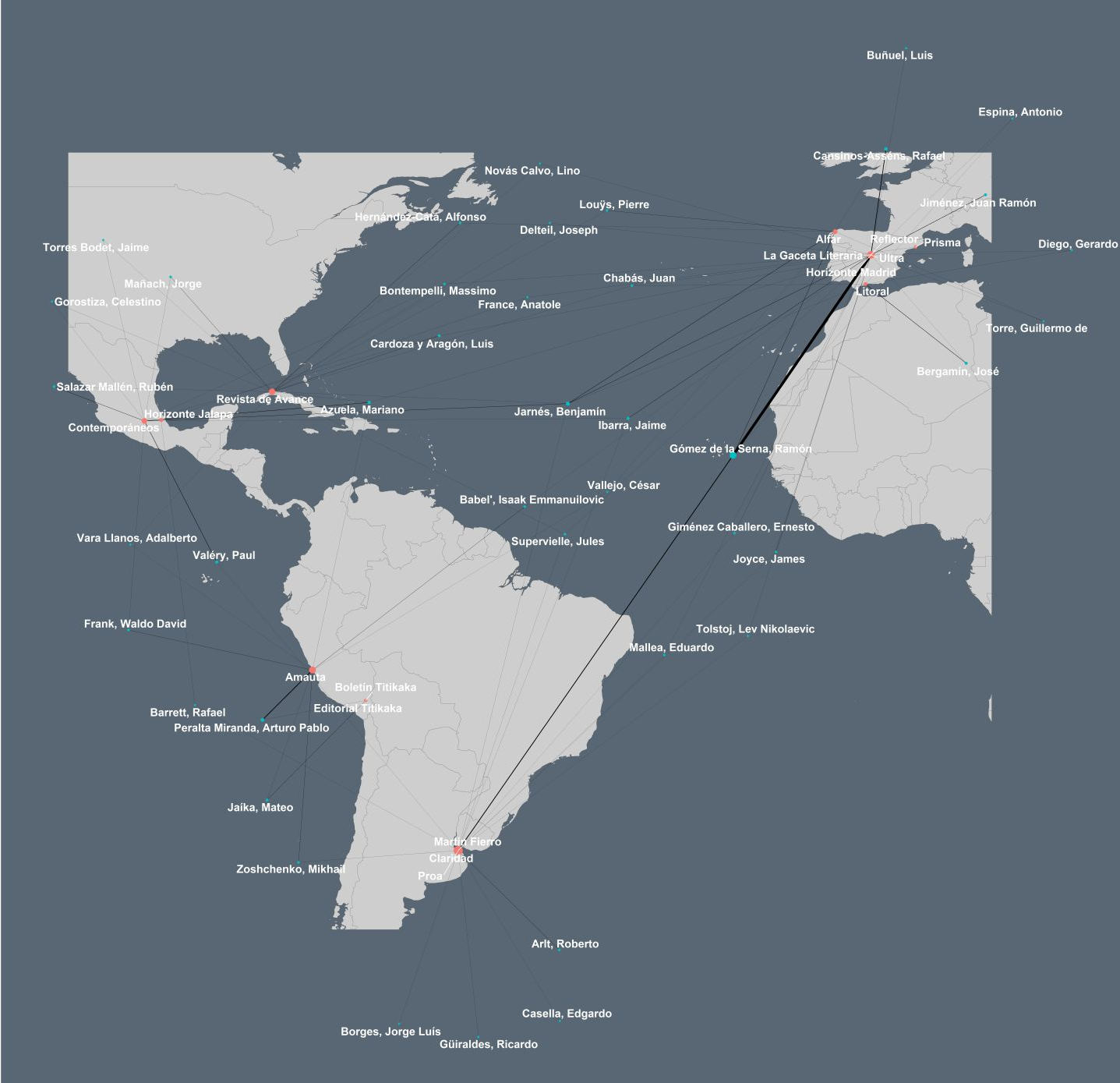 Figure 2: 41 Contributors to the genre ‘Fictional Prose’ (only those contributing to more than one magazine) [visualisation Jörg Lehmann].

The second visualization draws more attention to the magazines as a medial network, and less to their geo-location. It makes apparent what has been thematized above, that larger publications threaten to outshine the smaller ones, as their sheer numbers eclipse the others visually. What the network achieves, however, is once again a focus on a smaller group of authors that were formal connectors and ready to be received through the magazines in more medial locations through their fictional writing. (5) The largest group (329 authors) of the 370 Fictional Prose authors contributed to one publication exclusively. Most of those 329 authors published only one text (254 authors) in the respective publication; much fewer published two (36), three (21), four (9) or five (6) texts. The three most prolific authors contributing to only one magazine are Juanita Pueblo, with eleven texts in Claridad, María Wiesse, with six texts in Amauta, and Estuardo Núñez, similarly with six texts in Amauta. Accordingly, a higher number of contributions does not necessarily correlate with a wide dissemination of these texts, even less so does it correlate with cross-Atlantic publication. While the two authors with the most Fictional Prose contributions – Ramón Gómez de la Serna (83 Fictional Prose contributions in 8 magazines; 2 Hispanic America / 6 Europe) and Benjamín Jarnés (14 contributions in 7 magazines (6); 4 Hispanic America / 3 Europe) - are published transatlantically, the publications of the two authors that follow – Arturo Pablo Peralta Miranda (pseudonym Gamaliel Churata; 11 contributions), and Juanita Pueblo (also 11 contributions) – remain within the confines of Hispanic America. The same observation can be made across all contributors. Of the 19 transatlantically published contributors, nine (7) are responsible for three, and five (8) for two texts. The remaining three authors in the transatlantically published group all provide fewer contributions than the three most prolific who were printed in only one magazine: Mexican author Mariano Azuela places 7 texts with 4 magazines (Amauta, Contemporáneos, La Gaceta Literaria and Revista de Avance), Spaniard Jaime Ibarra with his 6 Fictional Prose texts is present in 4 magazines (Contemporáneos, La Gaceta Literaria, Martín Fierro, and Ultra) as well with 6 texts, and lastly Guatemalan Luis Cardoza y Aragón 4 texts were printed in 3 magazines (Contemporáneos, La Gaceta Literaria, and Revista de Avance).
When looking at the nodes of the magazines in the network below, a correlation can be seen between magazine size and connectedness. Larger publications like the Gaceta Literaria and Revista de Avance, but also medium sized ones like Contemporáneos and Martín Fierro tend to publish more Fictional Prose altogether and therefore are also better connected. At the same time, it is not only size that matters in this context, as the example of Claridad shows. More of a political magazine, it shares less connections with the other magazines, because its agenda is not predominantly driven by aesthetics but more by ideology, as the publishing of Tolstoy and Rafael Barrett underlines. A similar observation can be made with Peruvian Amauta. The well-connected magazines mentioned are definitely more interested in a cultural and literary exchange out of a desire to promulgate literary development, and therefore share authors that provide achievements in that regard. 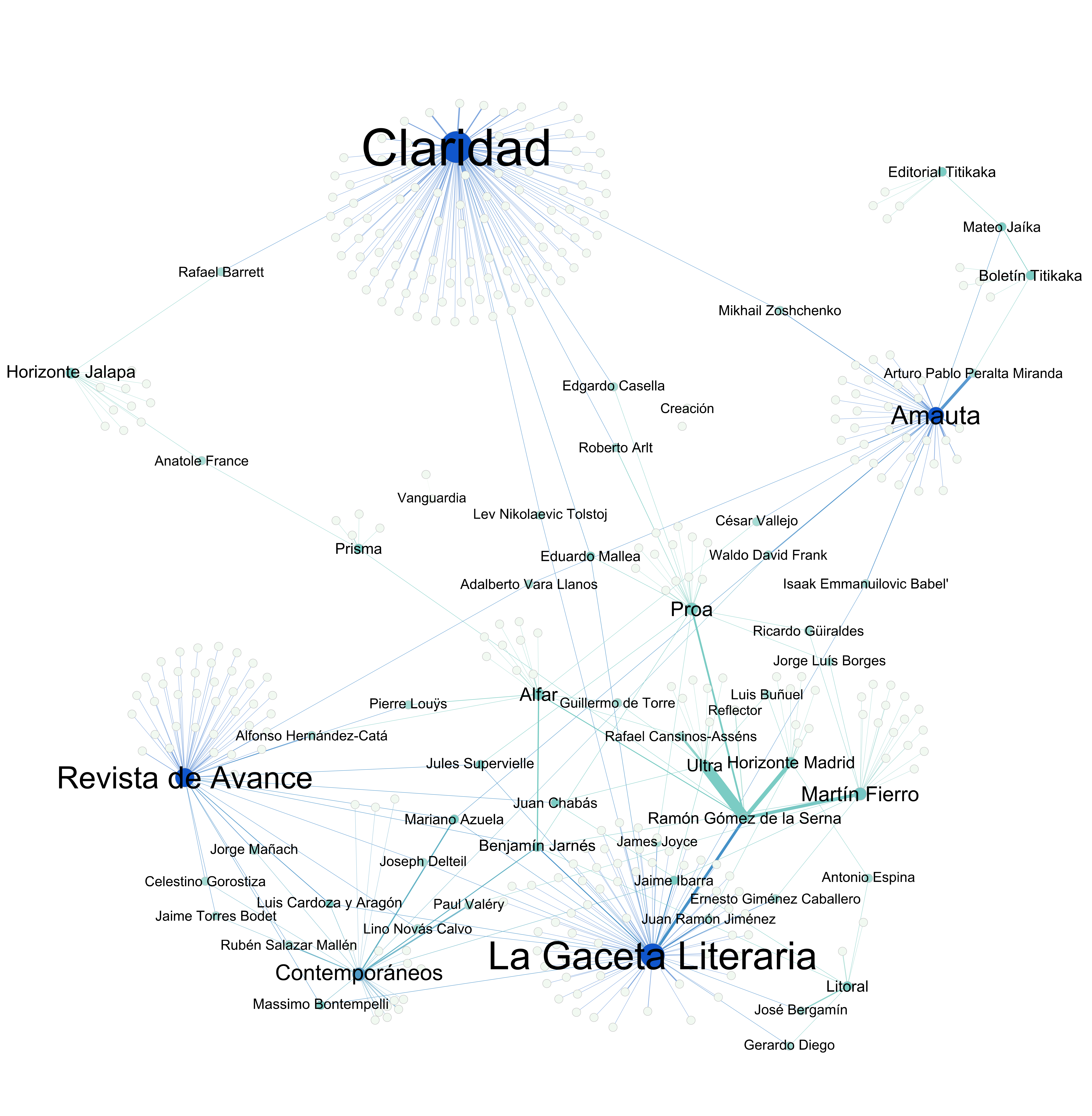 (1) ‘Larger’ in this case refers to the numbers of contributions caused by longer publishing periods, more or bigger issues, etc.
This table demonstrates the huge differences in numerical size as it gives the number of contributions per magazine:

(2) There are two problematic values in this table, as should be noted. For Claridad the category ‘Image’ has not been collected for the project out of time restraints. Everyone familiar with Claridad will notice this discrepancy immediately as the images in this magazine speak volumes of its political outlook. Moreover, the contents for this magazine have not been collected fully. The data that has been collected spans the period from July 1926 to December 1930, or the issues 1 to 221. As it is one of the larger magazines of this period and its publication of Fictional Prose exceeds the average value, it is included in this article.
For the same reason Alfar is also taken into account, despite the data collection covering only one year (September 1923 to September 1924), during which time the magazine was published in La Coruña, Galicia. In 1929 the magazine moved its publication place to Montevideo, Uruguay. For this period there has been no data collected in the project, which is why it is considered part of the Spanish literary field in the study.
(3) ‚der lyrische Charakter der narrativen Prosa und deren inhaltlich Belanglosigkeit. Die Summierung dieser Aspekte verrät die Ratlosigkeit der zeitgenössischen Kritik angesichts der Hybridität einer literarischen Form, die mit dem herkömmlichen Gattungsschema bricht.‘
(4) All translations: Teresa Herzgsell.
(5) In order to make the network more readable only the names of these authors that contribute to more than one magazine were included. The rest was kept as non-labeled nodes. Most contributors were published in one magazine alone and, in many cases, only once.
(6) This staggeringly high number in comparison with the other contributors is due to the fact that most of those texts by Ramón Gómez de la Serna are very small, condensed narrative images, in size rarely larger than a regular poem.
(7) Massimo Bontempelli, Juan Chabás, Eduardo Mallea, Jules Supervielle, Isaak Babel, Ernesto Giménez Caballero, Alfonso Hernández-Catá, James Joyce, and Pierre Louys.
(8) Joseph Delteil, Anatole France, Lino Novás Calvo, Leo Tolstoy, and César Vallejo. They are all published with one text in Europe and one in Latin America.
(9) The discrepancy between this number and the total of 370 Fictional Prose writers stems from not being able to find a country of origin for the remaining 83 of them.
(10) This is not visible in the networks included in this article for two reasons. First, the networks focus on Fictional Prose only. As the values for the Transatlantic Transfer Rate include all contributions of those authors it is possible that they published little to no Fictional Prose in the foreign as well as the continental markets. Second, a lot of contributors only published to one magazine, which renders them a non-labeled node.
(11) When looking at the other genres which include Ramón Gómez de la Serna, it shows that his reach in America is not much larger than that. There are two more magazines that both publish a short Non-fictional commentary note by him: Revista de Avance and Editorial Titikaka. His literary work stays within the confines of Europe and Argentina.