Teresa Herzgsell: Categorization as Theory and Practice: Type of Contribution 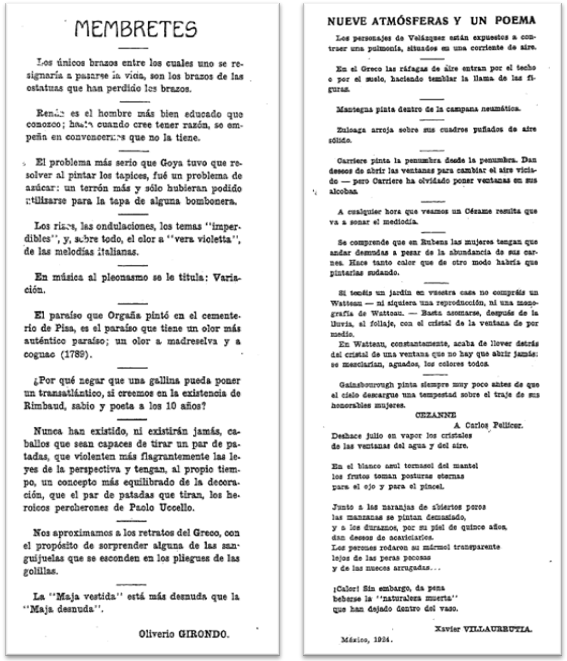 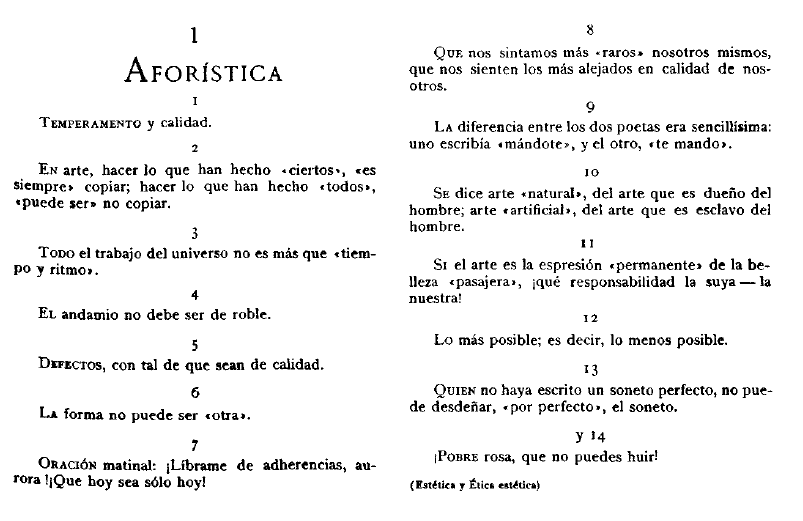 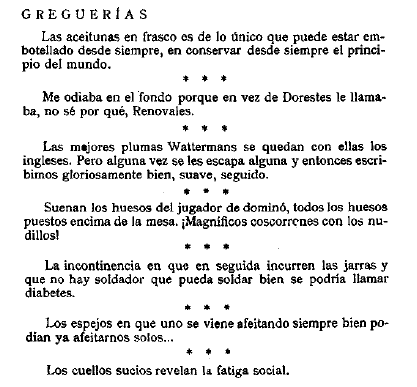 The explanations so far have concentrated on the literary texts in the magazine. The principal idea behind our typology, however, was to create a form-based profile of the magazines as cultural and literary magazines. This evokes three spheres of perspective. The mediatic sphere, which puts a focus on the magazines as products pertaining to the larger literary press. The literary sphere, which views the magazines as literary objects in themselves, and which has been in the focus of this article so far. And the cultural sphere, which opens the magazines to other art forms, that find their representation in the magazines not only in textual but also, and importantly, in visual form.
In the mediatic perspective, our interest was focused on reflections of culture and literature. To this end, we established three categories: Review, Magazine Review, and Non-fictional Prose. This allowed us to see the interconnectedness of the magazines amongst themselves, and within the broader cultural and literary field. Non-fictional Prose, in contrast to the two other medium-specific categories, is a rather large category. It has been purposefully created that way, as it is supposed to show the participation of the magazine in a wider discourse, be this political, philosophical, cultural etc. It functions as a counterpoint to the literary categories, and sheds a light on the objectives of the magazine. The guiding principle was based on trying to answer the question of whether a magazine was created more as a platform and publishing outlet for young artists and writers than as a means of commenting, informing, and explaining the literary and cultural field to an interested public.
Next to the textual contributions, most magazines also feature a multitude of images, multi-modality being a characteristic feature of cultural magazines. We created an extra category for these, which contains all imagery in the magazines. Visual culture is an important aspect of the magazines. Some go without any images, while others do not only include a specific aesthetic, but even mark their poetic and artistic belonging, thereby creating their own visual language. Grecia would be an interesting example of this, as it indicates its transition from modernism to avant-garde on its front cover (fig. 5). It first shows a classical Greek statue, from issues 1 to 13. Issues 14 to 16 then features a traditional Greek amphora. From issue 17 onwards this amphora is accompanied by a motor oil can, marking a breaking point and referencing the avant-garde principle of innovation and acceleration. Interestingly, on the cover of issue 42 the magazine returns to featuring only the amphora, before, from issue 43 onwards, featuring images more akin to other avant-garde magazines. For example, it depicts Norah Borges’ wood engravings, a portrait of Isaac del Vando Villar, and a painting by Robert Delaunay. 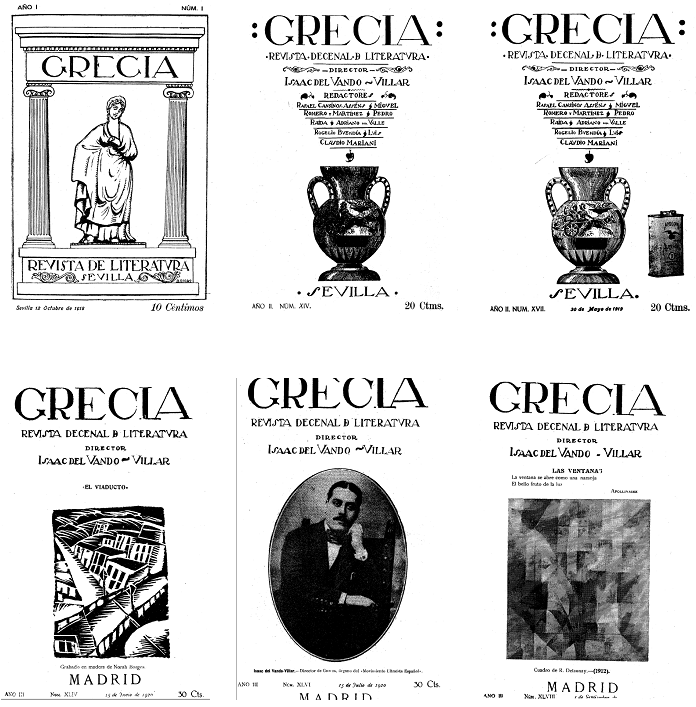 Other examples of the changing and developing visual culture in magazines would be Amauta indicating its connection to indigenous culture by including corresponding imagery, and Martín Fierro. Amauta manifested with its title its ‘adhesión a la Raza’ and its ‘homenaje al Incaismo’ (Mariátegui: 1), as ‘Amauta’ is a Quechua expression for wise men (Rössner: 247). The pre-colonial legacy presented in its first issue was prefigured visually by the cover picture of the head of a bronze-coloured Indian with an aquiline profile - an image that later became the hallmark of the publication. The inaugural cover was designed by the painter José Sabogal, artistic director of the magazine and responsible for most of the title pages. After a short sojourn in Mexico, Sabogal returned to Peru to strive for the creation of a revolutionary art in accordance with the new Peruvian spirit. He rebelled against European academism and his paintings, drawings and engravings became nurtured with ancient Inca richness. In consequence, the indigenous subject is not only present on the front covers but also appears on the inside pages, as Inca motifs depicting local flora and fauna or little scenes inspired by the traditional mates burilados – chiselled gourds – embellish the pages of the magazine.
A counterpoint to the ideologised, political and pro-indigenous magazine Amauta is Martín Fierro, which, lacking an indigenous legacy and political intention, may dedicate its title to the nation’s gaucho past, but sets the aesthetic and literary contents of the magazine firmly to other matters. The first issue of the periodical opens with the ‘Vuelta de Martín Fierro’, a column that defines its raison d'être. To the right of the short programmatic text, a cartoon of Martín Noel – mayor of Buenos Aires City – illustrates the ‘Balada del intendente de Buenos Aires’. In its initial editions, Martín Fierro relies heavily on the cartoonist Francisco Alberto Palomar (‘FAPA’) to illustrate its front pages, but in subsequent numbers shifts away from cartoons. The porteño periodical subsequently introduces a varied artistic repertoire, of national talents such as Norah Borges, Xul Solar, Emilio Pettoruti, José Fioravanti and Pablo Curatella), and of cosmopolitan big names such as Pablo Picasso, Georges Pierre Seurat, El Greco, Marc Chagall and Paul Gauguin.
The participation of contributions in multiple genre categories also pushes boundaries between the cultural -in this case visual-, mediatic, and literary spheres. Some of these cases can be even more problematic to decide, while at first glance seeming less of a difficulty than the multi-genred literary texts. Many questions arise from our corpus research, such as: What type in our model is a picture story, like the historieta ‘El barquillero y los pájaros’ (fig. 6) by Uruguayan artist Rafael Barradas? We have decided to assign it to the Image category, when at the same time it could also fall into the Fictional Prose category. (It was marked, however, by keeping the information on the language intact, with ‘Spanish’ noted in the respective column.) Where does the book review begin and where does the literary commentary end? Sometimes it is quite clear, while at other times it is a question of interpretation that is informed by the context and placement within a magazine. Is a list of ‘libros recibidos’ just a list, or does it have a function akin to a review? As this would lead to speculation regarding the motives of the magazines’ editors, we decided to sort such (and any) lists into Non-fictional Prose. Another more fundamental decision had to be made regarding autobiographical accounts, such as diary entries and travelogues. We decided to typologise them as Non-fictional Prose, despite an awareness of the long-standing debate (4) in literary studies on whether they are to be seen as fictional or non-fictional. Some texts prove to be more problematic and resistant to this decision-making process, and some categories are more prone to difficulties than others. The distinction between comments (as Non-fictional Prose) and reviews, for instance, is problematised by more frequent overlaps than that between Image and the text-based categories. Putting specific texts like short prose texts and lyrical prose texts, that are formally fairly close to each other into the categories, may require more interpretative work than simply allocating the fragment of a book of non-fiction and the fragment of a book of fiction. 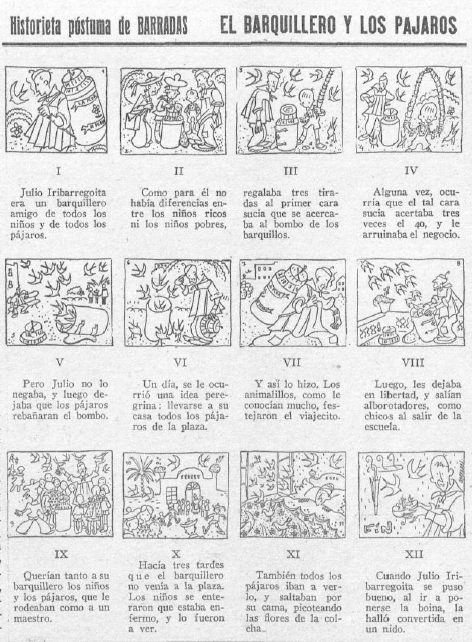 What can be taken away from these reflections on typology and the practice of sorting contributions is that decisions are not only made when building a typological model, but are made with every labelling act. To be more precise, to mark a text as falling mostly into a specific category, is a question of interpretation and ultimately a decision. These interpretations and decisions are made with an awareness of the interdependency and overlaps that the contributions have with other categories, analogous to the rhizomatic network structures formed by historical genres (Hempfer: 29).
As we have tailored the categories to our research questions, they have been able to bring to light some interesting aspects of the magazines.(5) One of the central goals of this typology was to create a comparability between the magazine, which led to a necessity of more general categories, to which a broad spectrum of contributions could be ascribed. Being aware of the implications of categorisation, we decided on a typology of the magazine contributions in our corpus which would allow us to gain insights into the specific research questions that are of interest to us in this project. Those questions are concerned with the formal profiles of the magazines and their (self-)positioning in the literary field. It cannot be stressed enough, however, that these typological differentiations, and any statistical and visual explorations done on the basis of them, can only be the starting point for any research and no end in itself. They are only as valuable as the dialogue created by each researcher with the original material is rich and meaningful.
In the organizational chart below (fig. 7), the categories will be made more transparent, as they are broken down into a more detailed specification of contributions pertaining to each category. These groups are also, as categories are in general, typological interpretations in themselves, and could easily be ordered another way. We decided on grouping them in this way as it best served our uses. We make them visible to the public in this organizational chart to allow for a better understanding of our data, and to inform about the content that can be expected to be found when browsing our datasheets via these categories. 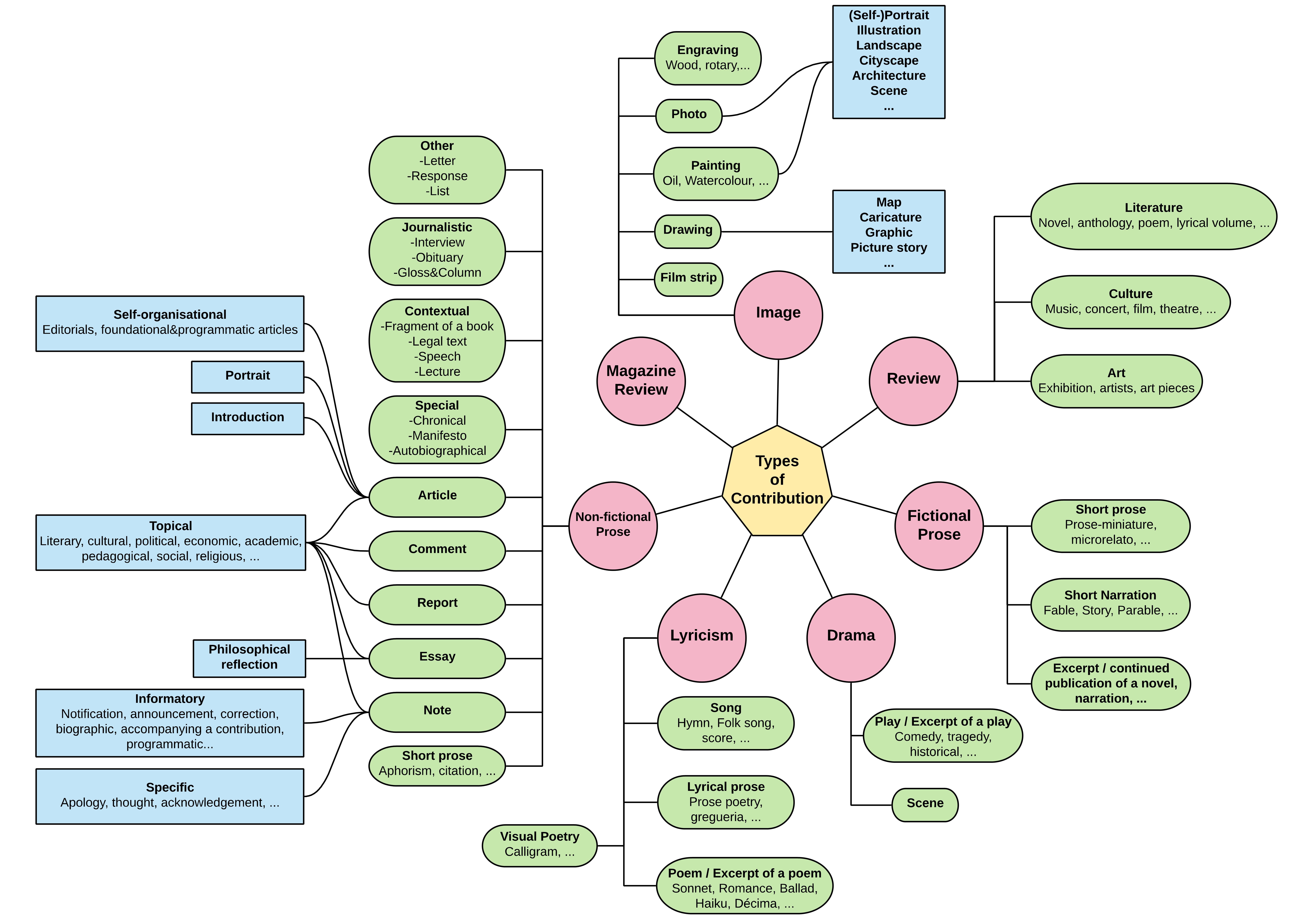 Figure 7: Contents of ‘Type of Contribution’

(1) ‘sich Überblick und Ordnung in der Vielfalt von Phänomenen eines Objektbereichs zu verschaffen’ (Lehmann)
(2) All translations: Teresa Herzgsell
(3) These genres can be traced back to Plato and Aristotle. However, not without difficulty, as Plato solely reflected on narratives (epic, dramatic, dithyramb), and Aristotle's Poetics ‘deals only with tragedy and epic’ (Frow: 62). As Frow illustrates, there is a slow historical process that shifts the description from the Platonic and Aristotelian modes of speech to the introduction of genres. This shift allowed the inclusion of lyricism next to drama and epic as a third genre (Frow: 61 ff.).
(4) For a summary of this debate see Martina Wagner-Egelhaaf‘s, Autobiographie (2005).
(5) For further reading consult: Teresa Herzgsell ‘Transkontinentale mediale Netzwerke: Perspektiven datenbasierten Arbeitens in der Zeitschriftenforschung’. In: Mark Minnes, Natasche Rempel (Eds.) Netzwerke – Werknetze. Transareale Perspektiven auf relationale Ästhetiken, Akteure und Medien (1910-1989). Hildesheim New York: Olms, 2021 (POINTE 20).

‹ Teresa Herzgsell: Categories – a Decision, not a Paradigm arriba Exemplary Findings from the Two Subprojects (Modernismo and Avant-Garde) ›