What is a cultural magazine? The question of the object of our studies, which would seem to be trivial in the case of books, opens up a fundamental epistemological problem in the case of printed modernist magazines. Already the periodicity of magazines- together with actuality, universality and publicity one of the four basic characteristics that are inherent in printed journals, but which they also share in principle with daily and weekly newspaper (1) - raises the question of how exactly we can define the unity of a continuously changing serial product.

Is it the title that makes the unity? Then one could, for example, read the Argentinean Martin Fierro. Periódico quincenal de arte y crítica libre that was edited from february 1924 to december 1927 in Buenos Aires also as a very late continuation of Martín Fierro. Revista popular ilustrada de Crítica y Arte which was published from 1904 to 1905. The editorial of the first edition even speaks explicitly of the "return” (“Vuelta”) of Martin Fierro and evaluates its own publication as a "second epoch” (“segunda época") (2). 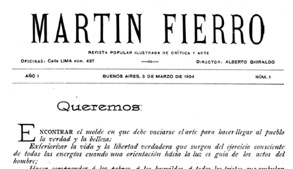 However, if the term ‘epoch’ actually refers to the turning point or stopping point of an era and the threshold to a new one, the continuous numbering of epochs is a paradox, because it combines the assertion of the dawn of a new era with the continuity of the continuous movement of time. This paradox is certainly symptomatic of the ambiguous relationship of magazines to their own temporality.

In any case, the title of a magazine usually gives it an only very relative "identity", which can be confused several times: diachronically through the existence of eponymous predecessors and synchronously through parallel doubles: Thus Jorge Luis Borges not only founded Proa twice at relatively short intervals (in 1922 and then again in 1924), but also reproduced the name of an avant-garde magazine founded in 1921 and published by Joan Salvat-Pappaseit in Barcelona, whose fleeting existence was certainly not unknown to Borges if we consider his activity in the circle of Spanish ultraistas. Conversely, there are also magazine projects that changed their title several times during their lifetime: Alfar is probably the most striking example of this from our corpus of research: the title first changed from Vida (Nos. 1-6) to Boletín de Casa América Galicia, América-Galicia. Revista Comercial Ilustrada Hispanoamericana and Revista de Casa América - Galicia (Nos. 21-32) before the magazine then kept the title Alfar for a longer time, but under this title it changed continent and was no longer published in Spain (La Coruña) but in Uruguay (Montevideo) (3).

To such changes of title and place of publication of magazines we have to add changes in format and appearance, which could sometimes be very drastic. An example of this is the Peruvian magazine Amauta, edited by José Carlos Mariátegui, which first appeared in the format 35 x 25.5 cm, but from number 17 on it changed to a much smaller format of 25 x 17.5 cm, which greatly limited the possibilities for the visual design, elaborated by José Sabogal in collaboration especially with Carmen Saco who contributed smaller hand-drawn miniatures – a design with such enormous impact that it had become crucial for the magazine. This external change in layout was perhaps at least as drastic as the interruption in the publication cycle between the ninth and tenth issues (due to an arrest of Mariategui), or the change in the editorial board after the early death of the magazines main editor from issue no. 30 to the last issue, no. 32. While Alberto Tauro, in the introduction to the facsimile reprint of the journal, therefore distinguishes between three epochs (4) following the logic explained by the editors themselves (5), the change of format mentioned above could also be considered an fundamental change, such as Maria Helene Goicochea who divides the journal's run into three alternative stages (Nos. 1-16, 17-29 and 30-32) (6). The hemerographic recording of Amauta is further complicated by another reason, which is the relation of the main journal to two different by-products. Even before the publication of the first number, the Minerva publishing house published the brochure Libros y Revistas, which served on the one hand to advertise its own publishing products, but on the other hand also as a review organ, from which the publishing relations between Minerva and other publishers can be seen. Libros y Revistas, with the publication of Amauta, then migrated successively into the magazine, and became there more and more deeply rooted in two steps. Up to the 9th issue, the brochure as an integrated supplement of Amauta retained both its own issue numbering and independent pagination, which was then abandoned from issue 10 onwards in favor of continuous pagination. With the aforementioned format change, Libros y Revistas was transformed from a supplement inside the magazine to a simple section, and the process of integration was thus completed. A second journal with which Amauta had a close relationship was Labor, "quincenario de información e ideas", which was also published in the Ediciones Minerva from November 1928 onwards, and which called itself a “extension of the labor of Amauta” ("extensión de la labor de Amauta") (7) but, unlike Libros y Revistas, remained materially separate from Mariategui’s magazine, so that, by analogy with the terminology of Gérard Génette, one can speak of a peritextual relationship between Amauta and Libros y Revistas and an epitextual relationship between Amauta and Labor. (8)

Amauta as a journal with several internal changes and a complex relationship to two supplementary journals is a particularly complex case, but also a good case to demonstrate cleary the epistemological problem of determining the "object” of study in case of periodical publications. In this case it can also be well illustrated that this elementary epistemological problem, which is already evident in the original printed medium, becomes complicated even more by in the process of media transformation, when historical cultural magazines in the course of digitization become digital artifacts.

In view of its outstanding cultural and historical significance, it is not surprising that Amauta has already been digitized twice, the first time as part of the digitization of the cultural journal holdings of the Ibero-American Institute of Prussian Cultural Heritage (IAI) (9), and the second time as part of the digitization of José Carlos Mariátegui's archive (10). A comparison of the two digitisations makes it clear how strongly the (preliminary) decisions of libraries and archives, which usually remain unspoken, determine which cultural heritage we will study in the future in digitized formats. The Ibero-American Institute does not have any originals of the journal in its holdings, but only the facsimile reprint that was produced in the mid-1970s (11). The Mariétegui Archive, for its part, has apparently been able to digitize the original holdings of the journal. If one compares the two editions, it becomes clear on the one hand that already in the course of the first medial transformation from original to reprint, the "object" was changed without these changes being made explicit. In addition to the unavoidable changes caused by photomechanical reproduction, pages with advertisements were quite obviously selected in the reprint, a separation made in libraries in their conservational practice between "actual" content and negligible paratext, which Robert Scholes and Clifford Wulfman have already explained and criticized widely(12). The digitisation carried out by the Mariátegui Archive is a positive exemplary in this sense and helps to fill the “holes in the archive” that were created in the reprint format (see Fig. 3). 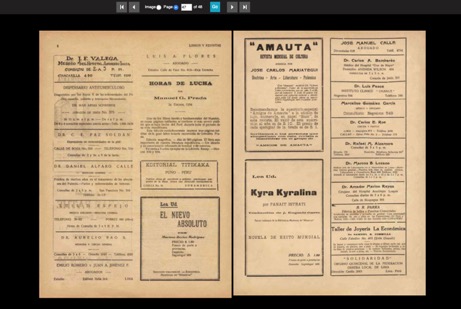 Fig. 3: Two pages of commercials in Libros y Revistas 8 in Amauta 6 that can’t be found in the reprint version http://hemeroteca.mariategui.org/index.php/Detail/collections/14

When it proceeded to digitize the facsimile print, the IAI logically had to reprent its “holes” At the same time, the librarians made further decisions autonomously according to their criteria, which also distinguish the digital artifact from the reprint edition. For example, the difficult case of the relationship between Amauta and Libros y Revistas, as explained above, was solved by not only cataloging both journals as separate titles until Libros y Revistas was completely absorbed as an internal section (this is, from number 17 ongoing) but also digitizing them separately (see Figs. 4 and 5-6). 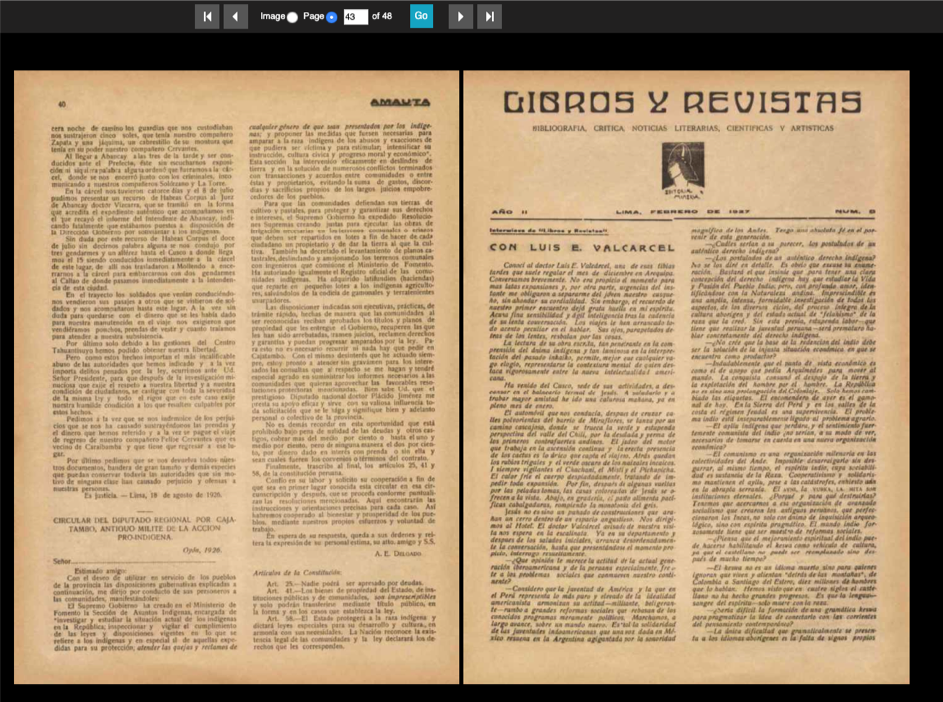 Fig 4: Libros y revistas and Amauta as one digital artefact in the Archivo Mariátegui 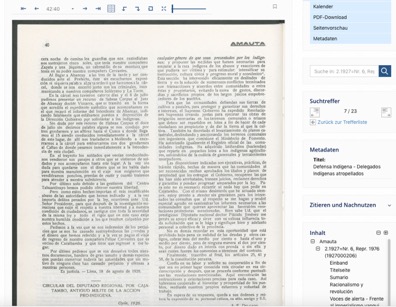 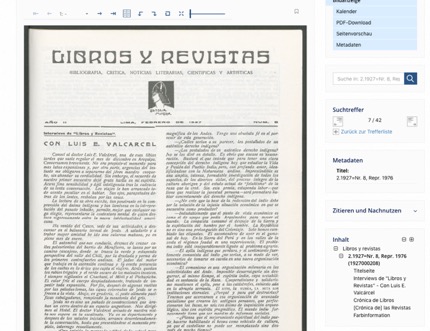 Fig. 5 u. 6: Libros y revistas and Amauta as two separated digital artefacts in the digital library of the IAI.

The decision to separate the related magazines is quite understandable (and it becomes clear if one reads library's catalogue entry, although not in the presentation environment of the digital collection itself), but it remains an institutional decision that makes it enormously difficult for the user of the digitized material to understand the original context of reception. The cultural journal as a object of research, very difficult to categorize even in print format, is becoming even more difficult to handle as a digital artefact in view of the lack of standardization of digitization processes, especially for periodical publication. This is already true for the different national contexts, but even more so if we want to compare them, as in our case within cultural area of the Spanish-speaking world, where there are no uniform standards of digitization, neither for the Spanish peninsula nor for the Latin American continent.

Of course, our research project could not solve this epistemological problem, but only deal with it consciously. The incompleteness, gaps and problems of the individual digital collections we used were therefore documented as extensively as possible in the corpus overview, so that subsequent research can understand on what basis the collected metadata were obtained. In some cases, such as the Cuban journal Avance, the gaps in the open-access holdings of the libraries and archives we used could be filled in independently, in other cases the holes had to be simply accepted - not to mention the considerable differences in the presentation of the digitized material (only image files or OCR-treated images in very different quality and resolution, sometimes presented as individual pages, sometimes bundled as booklets or even in entire volumes). But it is precisely the use of many different digital holdings that has also opened up an awareness of the preliminary decisions implied in every digital collection and not openly reflected by the archives and libraries themselves, so that our corpus’ overview, which can be accessed as a pdf-file (see for a desciription of this corpus also the next article), represents an important critical corrective for future transnational research, which, like ourselves, does not want to surrender without consciousness to the random criteria of grown, but not always rationally comprehensible traditions of given institutions and archives.