Claudia Cedeño Báez: Literary Genres and Networks in the Cultural Magazines of Modernismo

The modernist tranche of our research project consists of 16 publications: Alma Española, Arte Joven, El Nuevo Mercurio, Gente Vieja, Germinal, Helios, Instantáneas, La Biblioteca, La Habana Literaria, Luz, Luz i Sombra, Renacimiento, Revista Azul, Revista Nueva, Vida Literaria and Vida Nueva. After a close-reading collective effort, we put together a database of 10,217 contributions, which together reflect the plurality of discursive records in these printed media. What we proffer here, represents the first quantitative approach that accounts for 1) the standardisation of the manifold modernist manifestations through the typology expressly designed for our project, 2) the most prolific modernist authors, 3) the most densely-linked modernist authors and 4) their interrelation via the cultural transfer rate. These are just some basic suggestions for future explorations given that, as our database offers a multiplicity of focus options, modernist materials can be explored as a whole ensemble or focused upon more specifically, and approached from a perspective of literary genre, magazine title, contributor, language, geography, etc.

Rating Modernist Genres
Hereunder, we quantitatively expose the multiplicity of expressions that can be distinguished in our corpus of cultural magazines. The 10,000+ contributions are proportionally expressed and classified according to the 7 categories of the typology (see Herzgsell_Categories and Herzgsell_Categorization) developed for our research project. By means of a pie chart (figure 1), it is easy to identify non-fictional prose as the most prolific expressive technique (38.29%) in this set of publications, followed by lyricism (24.65%), graphic content (18.72%), fictional prose (11.47%), review (5.21%), drama (1.05%) and magazine review (0.61%). 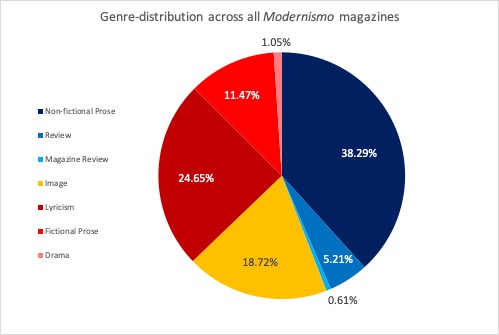 Notwithstanding that figure 1 depicts the predominance of non-fictional prose in our corpus as a whole, this does not mean that it prevails in all journals. When we seek to find the most recurrent genre in each single magazine title, the same database allows us to recognise that the quantitative superiority of non-fictional prose is only found in half of the 16 publications in our study (figure 2).

Additionally, the quantitative dominance of non-fictional prose in this corpus as a whole can be explained by the qualitative knowledge obtained through close reading. In this way, we were able to establish that the numerical superiority of non-fictional prose in the set is attributable to well-established publications with a frequent periodicity. Publications with both qualities comprised most of the entries of our dataset, with prominent examples being the magazine Gente Vieja which, published every 10 days from 1900 to 1905, created 2,581 entries in the database, and the weekly supplement Revista Azul, printed from 1894 to 1896, which provided 1,679 entries. These numbers in turn suggest that both journals would provide a disproportionately large number of contributions to the overall dataset. In contrast, La Biblioteca, despite being the magazine with the highest amount of non-fictional prose writings (86%) gave a total of only 372 contributions to the dataset. 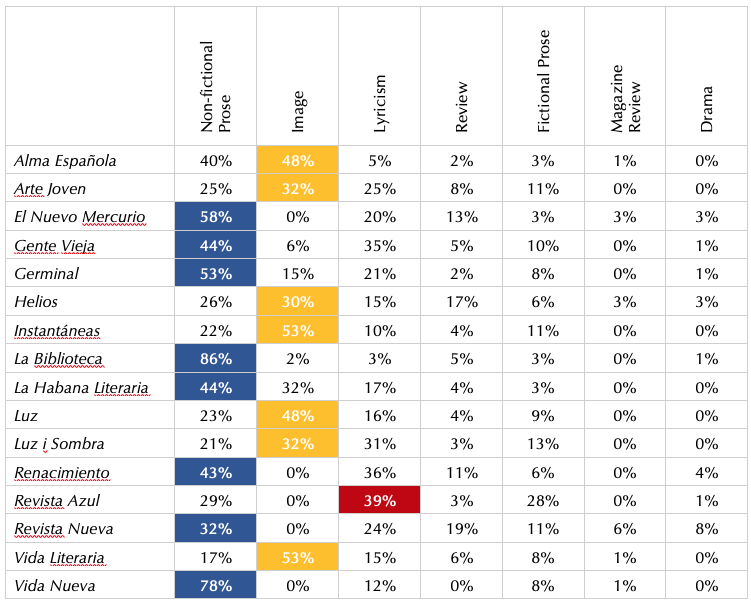 The quantitative distribution of genres enables us to get a broad glimpse into Modernist contents and tendencies, and taking into account the highest percentages presented in the same chart (figure 2), we can also identify the preference of each journal for a particular genre. El Nuevo Mercurio, Gente Vieja, Germinal, La Biblioteca, La Habana Literaria, Renacimiento, Revista Nueva and Vida Nueva excelled in having a higher percentage of non-fictional prose, favouring narrative, criticism –abundant in literary or cultural themes–, essay, chronicle and epistolary communication. For their part, Alma Española, Arte Joven, Helios, Instantáneas, Luz, Luz i Sombra and Vida Literaria were characterized by their profusion of imagery. And only Revista Azul was notably inclined to lyricism, focusing on the transformation of poetic norms and covering its pages with twelve-syllable verses.

Broad and delimited perspectives of genre distribution are truly helpful for channelling our explorations towards particular questions and interpretations. For instance, the high preponderance of non-fictional prose made us reconsider the general conception of Modernismo as a lyrical or escapist literary movement. In terms of the total contributions, the lyrical genre holds second place, a significant percentage but only after the prevailing non-fictional prose. Furthermore, fictional prose writings, which typically conveyed the readers to distant or exotic places to elude the often grim reality of the industrial-capitalist fin de siècle, occupy the fourth rank in frequency after non-fictional prose, poetry and image. As has therefore been demonstrated, our dataset provides comprehensive data that, when subject to data modelling, allows us to explore and analyse the genres contained in an array of Modernismo journals. Now we shall turn our attention to the modernist authors of our study.

Performance and Networks Among Fictional Prose Writers
Hereafter, in order to best display the information gleaned concerning modernist authors, we will feature their performance and their networks based on three key aspects: prolificity, connectivity, and scope of action. For the purpose of maximising the readability of this review, we will solely target fictional prose writers to see the relations between both prominent writers and those others who generally go unnoticed by traditional literary historiography.

In the context of the 16 modernist publications encompassed by our study, Ángel de Campo (58 contributions), Carlos Díaz Dufóo (41), Juan Valero de Tornos (28), Alejandro Bher (27), Manuel Gutiérrez Nájera (20), Ildefonso Llorente Fernández (14), Catulle Mendès (14), Antonio Joaquín Afán de Ribera (13) and Manuel Conrotte (12) stand out as the most prolific writers (figure 3). However, it should be clarified that despite being the most sizable fictional prose authors, their writings only circulated within a closed network, since all of their manuscripts point towards just one journal.

When looking for those authors with a considerable number of contributions but also well connected or recognized outside their own literary circle, at first glance we find Rubén Darío (20 contributions, within 3 magazines), Émile Zola (13, 4), José Fernández Bremón (12, 3), Emilia Pardo Bazán (10, 2), Jean Richepin (9, 3), René-Jean Toussaint – René Maizeroy –  (9, 2) and Ivan Turgenev (9, 2). Three French names are included in this small group of prolific and world-renowned authors, which attests to the strong influence of discursive cultural products radiating from Paris. 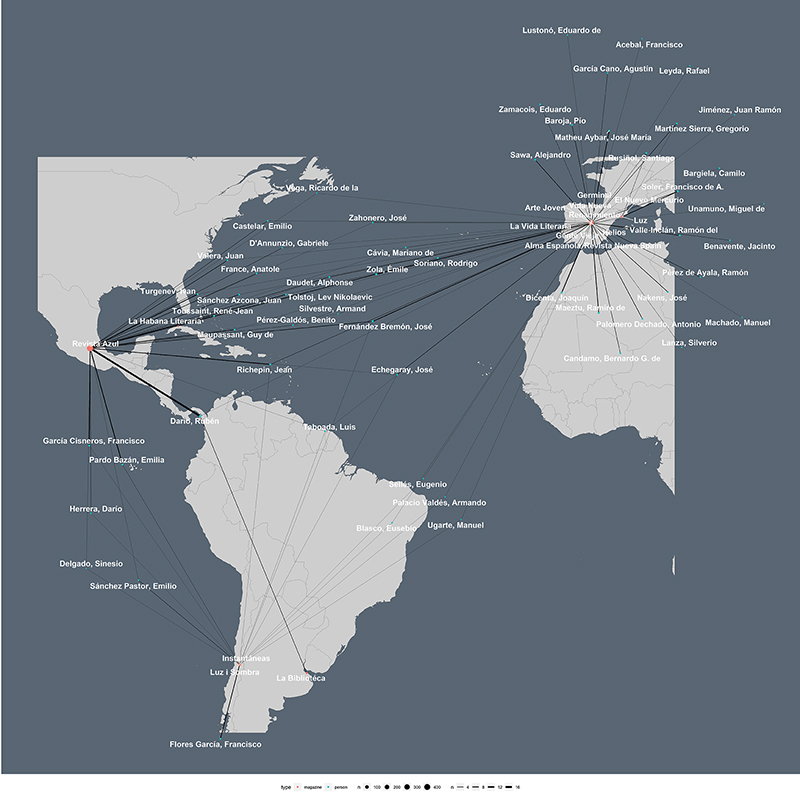 In Group A –authors who contributed to more than one magazine published only in Spain– those who stand out are Santiago Rusiñol (5 magazines), Ramón del Valle Inclán (3), Joaquín Dicenta (3), Pío Baroja (3), and Luis Taboada (3), followed by a sequence of fellow writers with a lower number of contributions. Consequently, it can be determined that the works of Spaniard fictional prose authors mainly circulated in local literary circles. Group B –authors who contributed to more than one magazine printed only in Latin America– comprises just five members. These are Francisco García Cisneros, Darío Herrera and Sinesio Delgado, who published in Revista Azul and Luz i Sombra, and Emilio Sánchez Pastor and Emilia Pardo Bazán, who published in Revista Azul and Instantáneas. The Spaniards Delgado, Sánchez Pastor and Pardo Bazán, from Group B, attest the influence of Spanish letters in Latin America, as well as, the translocal cultural exchange. Through their fictional prose writings, these Peninsular authors managed to build a cultural bridge between both sides of the Atlantic.

In this regard, when seeking those authors who enjoyed recognition in their home country but also beyond, Group C –authors published on both sides of the Atlantic– comprises a lengthy list of far-reaching authors confirming the modernist cosmopolitan spirit. Fictional prose works by Émile Zola (4 magazines), Lev Nikolaevic Tolstoj (3), José Fernández Bremón (3), José Echegaray (3), Alphonse Daudet (3), Mariano de Cávia (3) and Eusebio Blasco (3) can be found in Latin American as well as European magazines. But in pursuit of accurate computation for measuring the scope of their work, the ‘cultural transfer rate’ is proposed. This rate enables us to estimate the cultural exchange by differentiating between local and overseas published works in accordance with the author's place of origin. Considering the rate of cultural transfer (1) when evaluating Group C, the most far-reaching authors are Emilia Pardo Bazán (1.0), Ivan Turgenev (.88), René-Jean Toussaint (.88), José Fernández Bremón (.41) and Émile Zola (.38). Within the framework of our study, Emilia Pardo Bazán reaffirms herself as the most conspicuous modernist writer, given that she is the only female author published overseas, as noted in Group B, but also counts on the highest rate of cultural transfer.

Modernist Networks
We conclude this first approach with an overview of the fictional prose networks. These are but a glimmer of the extent and depth of the associations that laid the foundations for the introduction of aesthetic innovations and paved the way to the renewal of late-century literature. Networks illustrate the way magazines worked not only as vehicles for the dissemination of literary canons but also for establishing relationships.

A preferred style or the affection toward particular authors were meeting points between some Modernismo magazines. One of the most significant exchanges in this network (figure 5) is evinced by the intersections between Revista Azul (Mexico City) and Germinal (Madrid). Both magazines published texts by Émile Zola, Alphonse Daudet, Paul-Armand Silvestre and Guy de Maupassant, which reveals a shared taste for L'art pour l'art and an open attitude to cultural exchange, mainly with France. French texts and writers were widely reproduced and commented upon by both the first Mexican modernist magazine and the weekly that took its title from Zola’s eponymous novel. In addition to the strong French influence, the cultural currents from Spain are pervasive in the blue magazine, with prose writings from Emilia Pardo Bazán, Juan Valera, Juan Sánchez Azcona, Emilio Castelar and Benito Pérez-Galdós gracing many of its pages.

By contrast, certain magazines are notable for their lack of participation in the cultural exchange. The Madrid journals Revista Nueva, Helios and Alma Española mainly circulated at a local level, but due to their location shared a few collaborators. Other publications, such as El Nuevo Mercurio, Luz, Arte Joven, Renacimiento and La Biblioteca, had a similar lack of prominent cultural exchange. 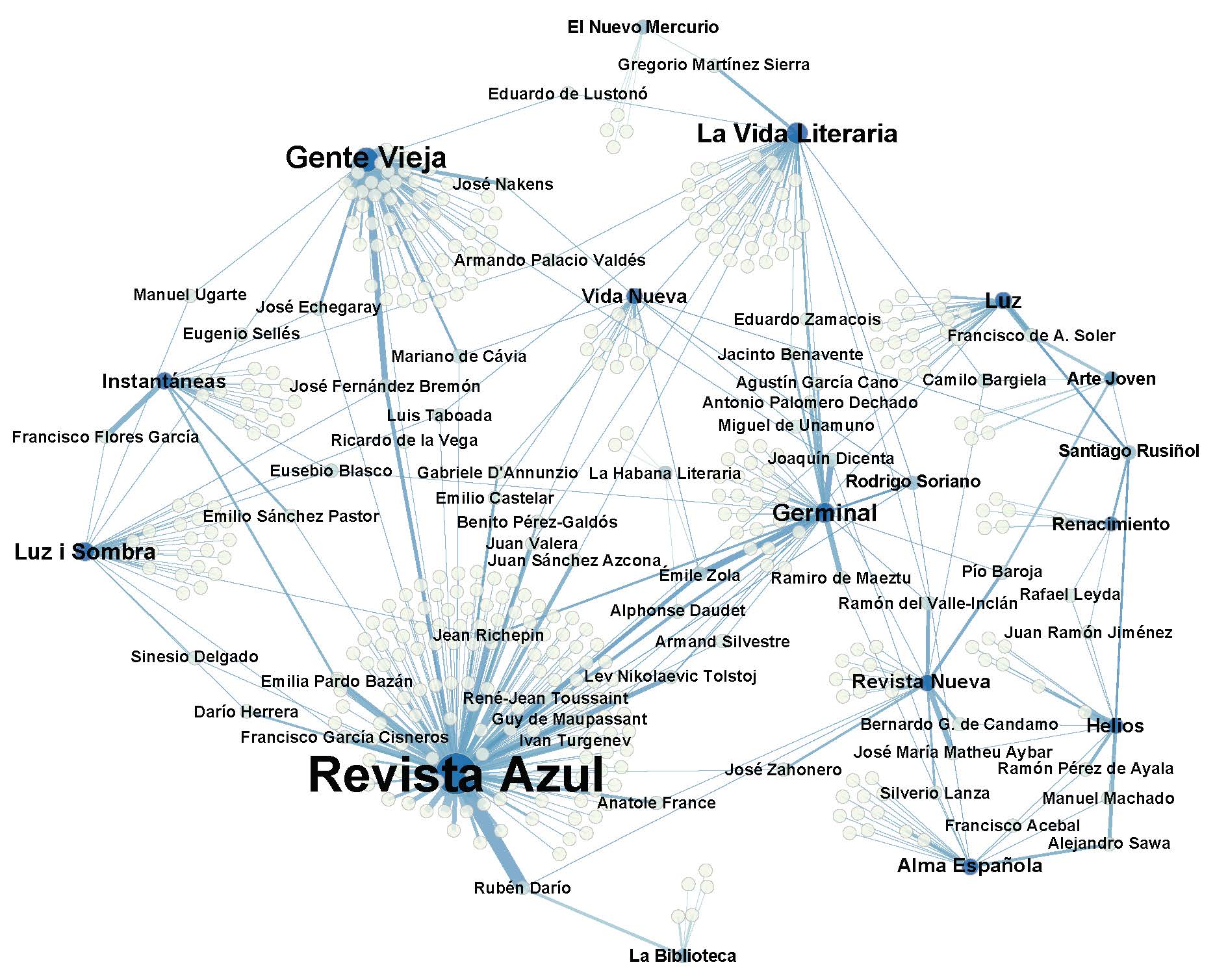 Aware that the exploration carried out is not exhaustive, given that the dataset was limited to 16 periodicals, we nevertheless wish to reiterate that the intention here was to demonstrate the discursive plurality held among our modernist materials and at the same time to suggest new ways for a critical, more comprehensive revision of what we have taken for granted about the modernist movement so far.

Tags:
modernismo
‹ Claudia Cedeño Báez: The Modernismo and its spiritual climate: Cosmopolitan, Blue and Francophile up Teresa Herzgsell: Genre distribution and Fictional Prose in the Magazines of the Avant-Garde ›