The Spanish Left of 1898 were angry young men, and the newspaper Germinal lays bare that anger. Stemming from the economic and social inequalities which pervaded Spanish society, the contributors to Germinal did not hold back when it came to speaking their minds, and did not hesitate to reproduce controversial writings from other countries. The newspaper can be characterised by a spirit of rebellion against established values, with anarchists lauded, feminists praised, and the monarchy criticised. But by far the greatest vitriol was reserved for the forces of capital and the capitalist system. The political tone of the newspaper did not, however, prevent it from appropriating gems from the artistic and literary world, which were then seeded among the political commentaries like shiny baubles in a magpie’s nest. In this brief review of the 34 extant digitised copies, found online at the Biblioteca Virtual de la Prensa Historica, Ministerio de Educación, Cultura y Deporte, I will analyse the elements of the newspaper which caught my eye, by way of indicating the potential rich pickings for historians or literary researchers who may be considering whether an in-depth study this periodical is worthy of their time.

The 34 copies which are reviewed here date from 30th of April 1897, when the periodical was launched, until the final issue of the 14th of April 1899. In exactly two years the magazine managed to feature most of the prominent writers of the ‘98 generation. Without wishing to turn this article into a tediously long list, which would be easy to do when there are over 200 named authors and artists in the newspaper, it would be remiss of me not to mention its most prominent contributors: Joaquin Dicenta (also the editor up until the 15th October 1897), Nicolás Salmerón y García (the subsequent editor), Ernesto Bark, Francisco Maceín, Rafael Delorme, Ramón de Maeztu, Jacinto Benavente, Juan Jurado de la Parra, Ricardo Fuente, Eduardo Zamacois, Salvador Rueda, Julio Poveda, Arturo Reyes, Julio Thermidor, Urbano González Serrano, Eusebio Blasco, Joaquín Segura, Antonio Palomero and José Verdes Montenegro. Several well-known Spanish names, although only appearing occasionally, are worthy of mention for their cultural weight. These include Ramón del Valle-Inclán, Santiago Rusiñol, Manuel José Quintana, Francisco Pí y Margall, Pío Baroja and José Echegaray. In addition, unsurprisingly for this explicitly feminist newspaper, women’s contributions are occasionally reproduced, with a report each from Bertha Wilhelmi and Louise Michel, a transcribed speech from Maud Gonne, four poems from Elisa Casas, and a painting from Maude Goodman. Not only is this a rich literary source for the writings of the Gente Nueva, but also through the regular news sections (Rasgos, Cosas) and profiles, there is plenty of historical and biographical material, with clues to the relationship dynamics of the community also lying within the text.

The newspaper also evidences an international circulation – a study of the Correspondencia Administrativa section shows that as well as subscribers in at least 170 Spanish localities, there are also subscribers in London, New York, Evora (Portugal) and Guadalajara (Mexico).

In addition to the variety of written genres within the magazine, there is also space given to the visual, with paintings often being used to provide the pictorial accompaniment to scathing social commentary. Examples of what might be deemed ‘protest art’ include the unsigned and untitled painting of the 24/4/1897 issue which portrays Christ crucified against steel girders, José Jiménez Aranda’s ‘Una desgracia’ (6/8/1897) of a builder falling from scaffolding (‘una de esas víctimas del orden social presente, que los anales contemporáneos cuentan ya por millones’), ‘Una huelga’ (F. Esser, 20/8/97) of starving workers being stabbed and shot by police at the Río Tinto mines, ‘Rendida’ (Luis Huidobro, same issue) of an impoverished seamstress collapsed over her work, and the self-explanatory painting by Joaquín Sorolla, ‘Trata de blancas’ (8/10/1897, pictured in its colourful original). 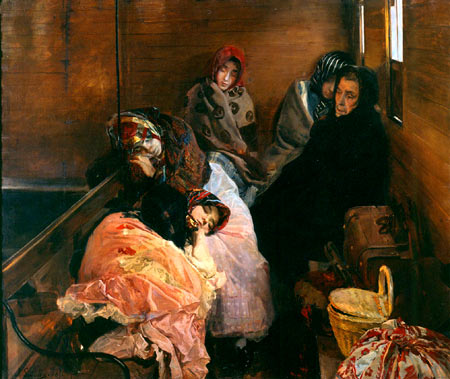 To completely dispossess the modern reader of any nostalgic, rose-tinted vision of the ‘good old days’, the newspaper offers the modern reader unflinching portraits of the realities of life for the working poor, whether that be of the starving Andalucian peasant, the builder, the conscript, or the equally hungry white-collar workers of the cities (‘los proletarios de levita’). Equally, the newspaper does not fail to point the finger at the culprits for this misery. In ‘El enemigo’ (18/6/1897) Ricardo Fuentes writes about how capitalism and capital is the enemy of the people, and by way of solution to the problem Rafael Delorme writes about how worker’s cooperatives can take banking into their own hands (‘Las cajas de resistencia’, 11/6/1897). The writing continues to sail close to the edge of social acceptability with Pablo Adam’s 9/7/1897 ‘Elogio de Ravachol’, which lionises and makes a martyr of the executed French anarchist, and continues to build in intensity with ‘¡Loor a los héroes de 1789!’ in the following week’s issue. The dissident voices grow to a crescendo with the publication in the 30/7/97 edition of the anonymous ‘Proceder salvaje. La Inquisición en España durante el siglo XIX’ which strongly criticises the Cánovas government and its treatment of the Montjuich prisoners, and ‘Disolución’ (Ramiro de Maeztu, writing under the pseudonym of Rotuney) which calls, as the title suggests, for the bourgeoisie to be dissolved so that the socialist agenda can proceed. Interestingly, it is precisely the last paragraphs of ‘Disolución’, which explain why ‘(esa) Bastilla del burguesismo deberá ser destruída’, which have been highlighted in the margins by a reader at some point with a pencil, although we will never know if this was a researcher, a sympathiser or a government censor.

Just over a week after Rotuney’s article, Spanish society is rocked to its foundations as, on the 8th of August 1897, prime minister Antonio Cánovas del Castillo is shot dead by the Italian anarchist Angiolillo Galli. As one might expect, this has implications for Germinal.

In the issue immediately after the assassination, we read the following in the ‘quick news’ section:

Despite the writers’ mocking defiance in the face of state oppression, it is all too much for one of the writers, Enrique Alonso y Orera, as can be seen in the following sardonic news snippet of the following week (20/8/1897):

One can hardly blame Alonso y Orera for his pusillanimity when his contributions to the newspaper had primarily centred on Spanish theatre. It also appears to be too much for the advertisers - after the 27/8/1897 issue (we can assume that payment is made weeks in advance), the advertisements reduce to a trickle, and in some issues disappear completely (compare the earliest issues, where up to eighteen advertisements featured).

For the remaining writers, their views remain unchanged, as seen by the anonymously written lead article of the same issue (‘El problema en pie’, 20/8/1897) which calls out the hypocrisy of Spanish society and the fact that executing the assassin treats the symptom of the problem of social injustice without treating the underlying cause of capitalism and corruption. Indeed, they place the murderer and the murdered on the same moral plane, as if enemy combatants at war.

It is clear that the combination of state repression with bohemian lifestyles is beginning to take its toll on the freethinkers, as we read a few weeks later, in the 10/9/1897 issue:

Unfortunately, his friends were wrong about his prospects for recovery. Delorme never did leave hospital. He died two months later, on the 29th November 1897, at the age of thirty.

As if to highlight the atmosphere of state repression, in the same issue (10/9/1897), ‘Otro Atentado’ details how the Government of Vizcaya has illegally suspended publication of another socialist newspaper, La Lucha de Clases, alleging that as its editor is on remand in prison, he is incapable of editing the newspaper.

Despite all of this, these events do not deter the writers of Germinal from continuing to speak their truth. One of the most outspoken critics of the capitalist regime is the gifted polyglot Ernesto Bark who, in a series of long expository essays (‘La internacional de oro’, 17/9/1897, ‘La international negra’, 1/10/1897, ‘La dinastía de oro’ 10/12/1897) does not hesitate to point fingers at the shadowy international financial cabal pulling the strings of Spain’s government and economy. He names specific institutions, families and even individuals, and his last piece, ‘La Dinastía de Oro’, is specifically about the Rothschilds’ rise to financial hegemony in Europe. He accuses the recently deceased Cánovas of being involved in their machinations, in exchange for the ascension to power:

Rather amusingly for such a great intellect, after listing a series of contemporaneous English, French and German books in Spanish about the banking plutocracy, he appears to ask in all seriousness: ‘¿Por qué no tratan Pérez Galdós, la Pardo Bazán, Picón, Valera, y otros novelistas españoles, asuntos de tan vital interés?’

Perhaps it is the fact that Ernesto [Ernst] Bark is not himself Spanish (he was born in Tartu, then of the Russian Empire, and had ethnic German and Eastern European roots), that he feels freer to talk of these matters than the Spanish intellectuals he cites. Perhaps his being an outsider made him less sensitive to the anxiety for social status and approval that was so central to the class-bound Spain of the time. Or it was simply because the Spanish intellectuals he cites knew instinctively that to critique their society to its core would risk their losing everything, including their health, even to the point of dying prematurely in poverty and persecution, as Delorme had.

At a time when national governments are once again persecuting its freethinkers (one may suggest that they never did stop), in this case of this magazine I must disagree with Beatriz Sarlo when she says ‘nada es más viejo que una revista vieja’.[1] For those of us who belief that history is to a certain extent cyclical, and who can see the parallels in the stage in the long economic cycle between then and now, these magazines not only provide an interesting window onto the past, but also provide a fresh perspective on the present. Because the huge social questions that these young men discussed still remain unresolved, and just as in 1898, the sense of desperation for their definitive solution is becoming ever more acute.